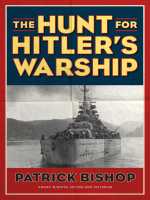 1) The Hunt for Hitler's Warship

In The Hunt for Hitler's Warship, Patrick Bishop tells the epic story of the men who would not rest until the Tirpitz lay at the bottom of the sea. In November of 1944, with the threat to Russian...
More Info
SHARE
Search Tools  Get RSS Feed  Email this Search
Powered By Aspen Discovery supported by ByWater Solutions
v. 22.06.02
CONNECT WITH US
Loading, please wait
...