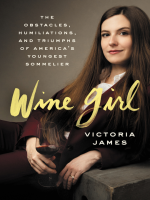 1) Wine Girl: The Trials and Triumphs of America's Youngest Sommelier

An affecting memoir from the country's youngest sommelier, tracing her path through the glamorous but famously toxic restaurant world

At just twenty-one, the age when most people are starting to drink (well, legally at least), Victoria James became the country's youngest sommelier at a Michelin-starred restaurant. Even as Victoria was selling bottles worth hundreds and thousands of dollars during the day, passing