Silent covenants: Brown v. Board of Education and the unfulfilled hopes for racial reform 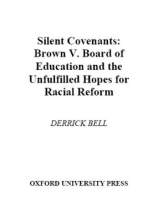 Description
When the landmark Supreme Court case of Brown vs. Board of Education was handed down in 1954, many civil rights advocates believed that the decision finding public school segregation unconstitutional could become the Holy Grail of racial justice. Fifty years later, despite its legal irrelevance and the racially separate and educationally ineffective state of public schooling for most black children,Brown is still viewed by many as the perfect precedent. Derrick Bell here shatters this shining image of one of the Court's most celebrated rulings. He notes that, despite the onerous burdens of segregation, many black schools functioned well and racial bigotry had not rendered blacks a damaged race.Brown's recognition of racial injustice, without more, left racial barriers intact. Given what we now know about the pervasive nature of racism, the Court should have determined--for the first time--to rigorously enforce the "equal" component of the "separate but equal" standard. By striking it down, the Court intended both to improve the Nation's international image during the Cold War and offer blacks recognition that segregation was wrong. Instead, theBrown decision actually enraged and energized its opponents. It stirred confusion and conflict into the always vexing question of race in a society that, despite denials and a frustratingly flexible amnesia, owes much of its growth, development, and success, to the ability of those who dominate the society to use race to both control and exploit most people, black and white.Racial policy, Bell maintains, is made through silent covenants--unspoken convergences of interest and involuntary sacrifices of rights--that ensure that policies conform to priorities set by policy-makers. Blacks and whites are the fortuitous winners or losers in these unspoken agreements. The experience with Brown, Bell urges, should teach us that meaningful progress in the quest for racial justice requires more than the assertion of harms. Strategies must recognize and utilize the interest-convergence factors that strongly influence racial policy decisions. In Silent Covenants, Bell condenses more than four decades of thought and action into a powerful and eye-opening book.
More Details
Format:
Language:
English
ISBN:
0195183975 (electronic bk.)

Bibliography
Includes bibliographical references and index.
Reproduction
Electronic reproduction.,Boulder, Colo. :,NetLibrary,,2004.,Available via World Wide Web.,Access may be limited to NetLibrary affiliated libraries.
Table of Contents
Plessy's long shadow
Brown's half light
Brown reconceived : an alternative scenario
The racial-sacrifice covenants
The interest-convergence "covenants
Brown as an anti-communist decision
The role of fortuity in racial policy-making
Racism's economic foundation
School litigation in the nineteenth century
The school desegregation era
The end of the Brown era
Brown as landmark : an assessment
Affirmative Action and racial fortuity in action
Searching for effective schools in the post-Brown era
Moving beyond racial fortuity.
Subjects
Other Subjects
Electronic books.
Also in This Series

Note! Citation formats are based on standards as of July 2010. Citations contain only title, author, edition, publisher, and year published. Citations should be used as a guideline and should be double checked for accuracy.
Staff View
Grouped Work ID:
Go To GroupedWork