Geography of religion where God lives, where pilgrims walk 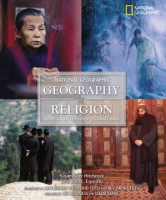 Bibliography
Includes bibliographical references (p. 404) and index.
Restrictions on Access
Use copy,Restrictions unspecified,star,MiAaHDL
Description
From the introduction by the renowned Archbishop Desmond Tutu and his daughter the Rev. Mpho Tutu to the Epilogue by His Holiness the Dalai Lama, this magnificent volume explores the birthplaces of the five great religions and follows them as they spread around the globe, defining the role of faith in human life and culture over the ages. Witness the births of Hinduism and Buddhism in India, and of the three great monotheistic religions-Judaism, Christianity, and Islam-in the Middle East. Then trace their paths to the 21st century. A fascinating history of worship unfolds, beginning with simple rituals inspired by the early humans' awe of nature and evolving through millennia into sophisticated beliefs, rich scriptures, and elaborate traditions. Highlighted by 200 illustrations-unforgettable photographs, informative maps, and stunning examples of sacred art from all over the globe-every page of this elegant, eloquent book brings new understanding both of the unique roots of the world's great religions and of the universal principles they share, all the more timely in this era when our world is divided by conflict, often stemming from differences in faith. Here are the great figures-a creator god common to all, even the earliest tribal beliefs, and the teachers and prophets: Buddha, Abraham, Moses, Jesus, Muhammad. Witness their teachings, along with the holy places where they flourished and the age-old observances that mark their traditions, from the Hindu ritual bathing in the Ganges before prayer to the Muslim hajj to Mecca, from the Jewish Passover seder to the Christian celebration of Christ's Resurrection. Here too are excerpts from each religion's texts, and evocative essays by eminent scholars on what their faith means to them and how it has shaped their view of life. In all, Geography of Religion reveals a vivid map of the paths we follow toward a higher truth. The Geography of Religion is an invitation to understand the great religions of the world. This gorgeously illustrated book is an authoritative text that portrays the great religions of humankind with vivid photographs, tracing each from its ancient roots to its role in modern life. Eminent scholars share the faiths they have lived and studied. For each of 5 major religions, explore the landscapes, areas, and cultures where these faiths took hold and flourished. See them spread around the world, survive conflict, and translate into other enduring faiths based on their geographic location and cultures. Learn what it means to be a Hindu and bathe in the sacred Ganges; for a Buddhist to revere a statue of the Enlightened One; for a Muslim to trek to Mecca; for Christian martyrs to welcome death. Beautiful maps, photographs, and art illuminate the history of each religion.
Reproduction
Electronic reproduction.,[S.l.] :,HathiTrust Digital Library,,2010.,MiAaHDL
System Details
Master and use copy. Digital master created according to Benchmark for Faithful Digital Reproductions of Monographs and Serials, Version 1. Digital Library Federation, December 2002.,http://purl.oclc.org/DLF/benchrepro0212,MiAaHDL
Action
digitized,2010,HathiTrust Digital Library,committed to preserve,pda,MiAaHDL