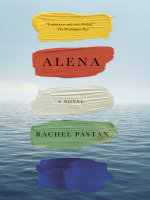 Formats
Adobe EPUB eBook
Works on all eReaders (except Kindles), desktop computers and mobile devices with with reading apps installed.
Sample Check Out OverDrive
Kindle Book
Works on Kindles and devices with a Kindle app installed.
Sample Check Out OverDrive
OverDrive Read
Sample Check Out OverDrive
Need Help?
If you are having problem using our eCollection, please visit our support center.
Description
In an inspired restaging of Daphne du Maurier's classic Rebecca, a young curator finds herself haunted by the legacy of her predecessor.Two years have passed since the tragic death of Alena, curator at the Nauk, a cutting-edge art museum on Cape Cod. At the Venice Biennale, Bernard Augustin, the Nauk's wealthy, enigmatic founder—to whom Alena had been closest confidante and muse—offers the position to an aspiring young curator from the Midwest. It's the job of her dreams, and she dives at the chance.Just as quickly, she finds herself well out of her depth. The Nauk echoes with phantoms of the past—a past obsessively preserved by the museum's staff—and the newcomer's every move mires her more deeply in artistic, erotic, and emotional entanglements. When recently discovered evidence calls into question the circumstances of Alena's death, shattering secrets surface, putting to the test the loyalty, integrity, and courage of our heroine—who remains nameless, like the heroine of Daphne du Maurier's Rebecca, the inspiration for this provocative and spellbinding tale.
More Details
Format:
Adobe EPUB eBook, Kindle Book, OverDrive Read
Street Date:
01/23/2014
Language:
English
ISBN:
9780698141605
ASIN:
B00DMCVZNE
Subjects
Fiction
Literature
Thriller

Note! Citation formats are based on standards as of July 2010. Citations contain only title, author, edition, publisher, and year published. Citations should be used as a guideline and should be double checked for accuracy.
Copy Details
Staff View
Grouped Work ID:
0844cf0c-8598-d849-0332-052c38b6a961
Go To Grouped Work