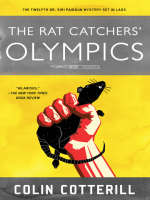 Formats
Adobe EPUB eBook
Works on all eReaders (except Kindles), desktop computers and mobile devices with with reading apps installed.
Sample Check Out OverDrive
Kindle Book
Works on Kindles and devices with a Kindle app installed.
Sample Check Out OverDrive
OverDrive Read
Sample Check Out OverDrive
Need Help?
If you are having problem using our eCollection, please visit our support center.
Description
The 1980 Olympic Games in Moscow is already rife with controversy, but when a Lao athlete is accused of murder, it escalates into a full blown international incident. In the twelfth entry to the series, Dr. Siri Paiboun and his quirky team of misfits are on the case in a city and country foreign to them, yet familiar in its corruption of justice. 1980: The People's Democratic Republic of Laos is proud to be competing in its first-ever Olympics. Of course, half the world is boycotting the Moscow Summer Olympic Games to protest the Soviet Union's recent invasion of Afghanistan, but that has made room for athletes from countries that are usually too small or underfunded to be competitive—like Laos.Ex-national coroner of Laos Dr. Siri Paiboun may be retired, but he and his wife, Madame Daeng, would do just about anything to have a chance to visit Moscow, so Siri finagles them a trip by getting them hired as medical advisers to the Olympians. Most of the athletes are young and innocent village people who have never worn running shoes, much less imagined anything as marvelous as the Moscow Olympic Village. As the competition heats up, however, Siri begins to suspect that one of the athletes is not who he says he is. Fearing a conspiracy, Siri and his friends investigate, liaising in secret with Inspector Phosy back home in Laos to see if the man might be an assassin. Siri's progress is derailed when a Lao Olympian is accused of murder. Now in the midst of a murky international incident, Dr. Siri must navigate not one but two paranoid government machines to make sure justice is done.
More Details
Format:
Adobe EPUB eBook, Kindle Book, OverDrive Read
Street Date:
08/15/2017
Language:
English
ISBN:
9781616958268
ASIN:
B01N0G822N
Subjects
Fantasy
Fiction
Mystery
Historical Fiction

Note! Citation formats are based on standards as of July 2010. Citations contain only title, author, edition, publisher, and year published. Citations should be used as a guideline and should be double checked for accuracy.
Copy Details
Staff View
Grouped Work ID:
c56c05e5-82e2-6b99-25a3-cf6c771d31b5
Go To Grouped Work