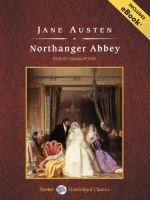 Formats
OverDrive MP3 Audiobook
Works on MP3 Players, PCs, and Macs. Some mobile devices may require an application to be installed.
Sample Sample  Place Hold OverDrive
OverDrive Listen
Sample Sample  Place Hold OverDrive
Need Help?
If you are having problem using our eCollection, please visit our support center.
Description
Jane Austen's Northanger Abbey is both a perfectly aimed literary parody and a withering satire of the commercial aspects of marriage among the English gentry at the turn of the nineteenth century. But most of all, it is the story of the initiation into life of its naive but sweetly appealing heroine, Catherine Morland, a willing victim of the contemporary craze for Gothic literature who is determined to see herself as the heroine of a dark and thrilling romance. When Catherine is invited to Northanger Abbey, the grand though forbidding ancestral seat of her suitor, Henry Tilney, she finds herself embroiled in a real drama of misapprehension, mistreatment, and mortification, until common sense and humor-and a crucial clarification of Catherine's financial status-puts all to right. Written in 1798 but not published until after Austen's death in 1817, Northanger Abbey is characteristically clearheaded and strong, and infinitely subtle in its comedy.
More Details
Format:
OverDrive MP3 Audiobook, OverDrive Listen
Edition:
Unabridged
Street Date:
02/23/2009
Language:
English
ISBN:
9781400190782
Accelerated Reader:
MG
Level 10.8, 16 Points
Subjects
Classic Literature
Fiction
Literature

Note! Citation formats are based on standards as of July 2010. Citations contain only title, author, edition, publisher, and year published. Citations should be used as a guideline and should be double checked for accuracy.
Copy Details

There are 5 holds on this title.