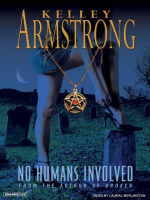 Formats
OverDrive MP3 Audiobook
Works on MP3 Players, PCs, and Macs. Some mobile devices may require an application to be installed.
Sample Sample Check Out OverDrive
OverDrive Listen
Sample Sample Check Out OverDrive
Need Help?
If you are having problem using our eCollection, please visit our support center.
Description
Readers around the world have fallen for Kelley Armstrong's intoxicating, sensual, and wicked tales of the paranormal, in which demons, witches, werewolves, and vampires collide-often hilariously, sometimes violently-with everyday life. In Armstrong's first six novels, Elena, Paige, and Eve have had their way with us. Now get ready for Jaime Vegas, the luscious, lovelorn, and haunted necromancer. Jaime, who knows a thing or two about showbiz, is on a television shoot in Los Angeles when weird things start to happen. As a woman whose special talent is raising the dead, her threshold for weirdness is pretty high: she's used to not only seeing dead people but hearing them speak to her in very emphatic terms. But for the first time in her life-as invisible hands brush her skin, unintelligible fragments of words are whispered into her ears, and beings move just at the corner of her eye-she knows what humans mean when they talk about being haunted. Jaime is determined to get to the bottom of these manifestations, but as she sets out to solve the mystery she has no idea how scary her investigation will get or to what depths ordinary humans will sink in their attempts to gain supernatural powers. As she digs into the dark underside of Los Angeles, she'll need as much Otherworld help as she can get in order to survive, calling on her personal angel, Eve, and Hope, the well-meaning chaos demon. Jeremy, the alpha werewolf, is also by her side offering protection. And, Jaime hopes, maybe a little more than that.
More Details
Format:
OverDrive MP3 Audiobook, OverDrive Listen
Edition:
Unabridged
Street Date:
5/1/2007
Language:
English
ISBN:
9781400124411
Subjects
Fiction
Horror
Literature
Mystery

Note! Citation formats are based on standards as of July 2010. Citations contain only title, author, edition, publisher, and year published. Citations should be used as a guideline and should be double checked for accuracy.
Copy Details
Staff View
Grouped Work ID:
43fd1dc2-9651-899e-276f-e43a00b30f79
Go To Grouped Work