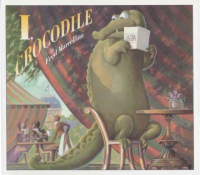 All Paris is enchanted with this exotic creature. But for a crocodile with an appetite as big as his ego, being the toast of the town has its downside, too. What's a crocodile who's used to a dinner of flamingo, snake, or mongoose to make of chocolate mousse? Oh, to return to his beloved Nile! But fickle Napoleon has other plans for our hero... Inspired by an obscure nineteenth–century French satire, I, Crocodile is the first book Fred Marcellino has written as well as illustrated.

General Note
"Inspired by a nineteenth century satire by an unknown French author...."
Description
When a Nile crocodile is brought back to Paris by the Emperor Napoleon, it must not only struggle to get enough to eat, but escape from being eaten, too!
Description
While plundering Egypt, Napoleon takes a souvenir crocodile as well. Paris is enchanted by the exotic creature, but the crocodile wants to go home and get back to his normal existence.
Target Audience
2.90.
Target Audience
K-3.
Table of Contents
Loading Table Of Contents...
Subjects
LC Subjects
Egypt -- Fiction.
Paris (France) -- Fiction.
Also in This Series

Note! Citation formats are based on standards as of July 2010. Citations contain only title, author, edition, publisher, and year published. Citations should be used as a guideline and should be double checked for accuracy.
Staff View
Grouped Work ID:
8ee401ee-806a-f9f1-17f9-331d8245edbf
Go To GroupedWork