Locas: the Maggie and Hopey stories : a love and rockets book
(Book) 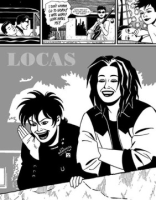 Copies
Location
Call Number
Status
Last Check-In
Central Graphic Novels
GRAPH LOCAS
Available
Feb 1, 2020
Description
One of the most humane, graceful and imaginatively inexhaustible artists in American popular culture, Jaime Hernandez has created in Locas one of the great American novels of the last 30 years, graphic or otherwise. Created over 15 years from 1981 to 1996 in the pages of the legendary comic book series Love and Rockets, Locas tells the story of Maggie Chascarrillo, a bisexual, Mexican-American woman attempting to define herself in a community rife with class, race and gender issues.Maggie's story begins in the early-1980s Southern California rock scene, when it was shifting from the excesses of the 1970s to the gritty basics of punk and new wave. Hardcore punk rock came to the fore, and the teenaged Maggie finds herself drawn to the anarchy, energy and diversity of the scene, which in Jaime's hands becomes a very real, habitable place populated with authentic human beings rather than stereotypes. She quickly befriends Hopey Glass, a feisty anti-authoritarian punkette who quickly becomes Maggie's on-again, off-again lover and a constant presence in her life throughout the book.As the New York Times Book Review has described it, "These stories have all the visual smarts of film and the narrative smarts of literature....Hernandez specializes in psychological detail; we see both text and subtext immediately ....What better than to open a book that shows there is more going on than we dream of in our workaday philosophies?"
More Details
Format:
Book
Edition:
First Fantagraphics Books edition.
Physical Desc:
200 pages : illustrations ; 27 cm.
Street Date:
200409.
Language:
English
ISBN:
156097611X, 9781560976110
Table of Contents
Loading Table Of Contents...
Subjects
LC Subjects
Bisexual women -- California -- Comic books, strips, etc.
Mexican American women -- Comic books, strips, etc.
Punk culture -- Comic books, strips, etc.
Other Subjects
Graphic novels.
Also in This Series

Note! Citation formats are based on standards as of July 2010. Citations contain only title, author, edition, publisher, and year published. Citations should be used as a guideline and should be double checked for accuracy.
Staff View
Grouped Work ID:
9d5873ed-b1f1-bd8f-19db-bfaa6592721b
Go To GroupedWork