The false prince
(Audiobook on CD) 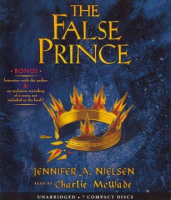 Copies
Location
Call Number
Status
Last Check-In
Central Teen Audiovisual
Y/CD F NIELS
Available
Mar 10, 2019
Description
New York Times bestseller The False Prince thrills with wild twists and turns, danger and deceit, and the revelation of hidden identities that will have readers rushing breathlessly to the end.In a discontented kingdom, civil war is brewing. To unify the divided people, Conner, a nobleman of the court, devises a cunning plan to find an impersonator of the king's long-lost son and install him as a puppet prince. Four orphans are recruited to compete for the role, including a defiant boy named Sage. Sage knows that Conner's motives are more than questionable, yet his life balances on a sword's point -- he must be chosen to play the prince or he will certainly be killed. But Sage's rivals have their own agendas as well.As Sage moves from a rundown orphanage to Conner's sumptuous palace, layer upon layer of treachery and deceit unfold, until finally, a truth is revealed that, in the end, may very well prove more dangerous than all of the lies taken together.An extraordinary adventure filled with danger and action, lies and deadly truths that will have readers clinging to the edge of their seats.And don't miss the highly anticipated fourth book in the series, The Captive Kingdom, coming October 2020!
More Details
Format:
Audiobook on CD
Edition:
Unabridged.
Physical Desc:
7 audio discs : digital ; 4 3/4 in.
Language:
English
ISBN:
9780545391665
UPC:
9780545391665
Accelerated Reader:
MG
Level 5.1, 12 Points
Lexile measure:
710

General Note
Title from web page.
Participants/Performers
Read by Charlie McWade.
Description
Sage was just a young orphan in the kingdom, until a nobleman by the name of Conner chose him to be part of a devious plan. With the kingdom on the brink of civil war, Conner needed something to unite the people, and he found that something in Sage. By making the boy pose as the long-lost son of the king, Conner hopes to use him as a way to avert war. But Sage begins to suspect that Conner's plans may involve more than he is letting on.
System Details
Compact discs.
Table of Contents
Loading Table Of Contents...
Subjects
LC Subjects
Courts and courtiers -- Juvenile fiction.
Impersonation -- Juvenile fiction.
Orphans -- Juvenile fiction.
Princes -- Juvenile fiction.
Other Subjects
Audiobooks.
Children's audiobooks.
Also in This Series

Note! Citation formats are based on standards as of July 2010. Citations contain only title, author, edition, publisher, and year published. Citations should be used as a guideline and should be double checked for accuracy.
Staff View
Grouped Work ID:
56e484c1-d513-dda2-3b3b-2057370f3f60
Go To GroupedWork