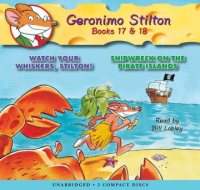 General Note
Duration: 2:28:00.
General Note
Originally published in Italian by Edizioni Piemme S.p.A., Casale Monferrato, Italy, in 2001 and 2003. Translated into English by Edizioni Piemme S.p.A in 2005.
Creation/Production Credits
Directed and produced by Paul Ruben ; executive producer, Cheryl Smith.
Participants/Performers
Read by Bill Lobley.
Description
Watch your whiskers, Stilton: A mysterious one-eyed rat is trying to steal The Rodent's Gazette from under my nose! My manager came up with a plan to stop him. He arranged for me to appear on a TV quiz show. But if I lose I have to give up my tail!
Description
Shipwreck on the Pirate Islands: My sister, Thea, comes up with a new way to torment me. She's combined my two least favorite things: travel and ghosts! She heard rumors of a haunted pirate treasure buried on an island and she dragged me into her treasure hunt!
Target Audience
Ages 7-10.
System Details
Compact discs.