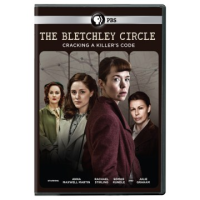 General Note
Originally broadcast as a three-episode television miniseries on PBS in 2013.
General Note
Special features: interviews with cast and crew.
Creation/Production Credits
Director of photography, John Pardue ; editor, Stephen O'Connell ; music by Nick Green.
Participants/Performers
Anna Maxwell Martin, Rachael Stirling, Sophie Rundle, Julie Graham.
Description
Four women who worked as codebreakers at Bletchley Park have taken up civilian lives. Susan has collated data about a series of murders. She tries to convince the police she knows where another body is, but they are unable to locate it and dismiss her. She turns to her three friends and they work out where the next victim will be taken, find the body, and then decide they are the only ones who can track down the killer.
Target Audience
Rating: TV14.
System Details
DVD, NTSC, region 1, widescreen presentation; stereo.
Language
In English with optional English subtitles for the deaf and hard of hearing.