The wind in the willows
(Book) 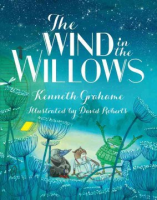 General Note
In its original publication these stories were written as stories to amuse the author's only son, Kenneht Grahame in 1909.
General Note
Originally published: Oxford: Oxford University Press, 2012.
General Note
"One chapter, "The Piper at the Gates of Dawn," that appears in Kenneth Grahame's original story, has been omitted from this edition. Rather than relating the ongoing adventures of Ratty, Mole, Toad, Badger, and others, the chapter pauses the action and is largely about the god Pan from Greek mythology. Although the chapter is not included, Pan himself is present in this book: he appears fleetingly throughout." -- Tp. verso
Description
"Meek little Mole, willful Ratty, Badger the perennial bachelor, and petulant Toad. Since their first appearance over a hundred years ago in 1908, they've become emblematic archetypes of eccentricity, folly, and friendship. And their misadventures--in gypsy caravans, stolen sports cars, and their beloved Wild Wood--continue to capture readers' imaginations and warm their hearts long after they grow up. Begun as a series of letters from Kenneth Grahame to his son, THE WIND IN THE WILLOWS is a timeless tale of animal cunning and human camaraderie"--,Provided by publisher.

The river bank
The open road
The wild wood
Mr. Badger
Dulce domum
Toad's adventures
Wayfarers all
The further adventures of toad
Like summer tempests came his tears
The return of Ulysses.

Note! Citation formats are based on standards as of July 2010. Citations contain only title, author, edition, publisher, and year published. Citations should be used as a guideline and should be double checked for accuracy.