The Roosevelts : an intimate history
(DVD) 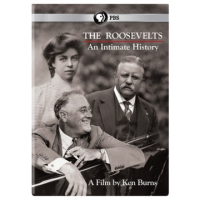 General Note
Originally broadcast on television by PBS as an episodes of the television program in 2014.
General Note
Language options taken from DVD menu and may differ slightly from container packaging.
General Note
Companion book: The Roosevelts : an intimate history / Geoffrey C. Ward ; based on a documentary film by Ken Burns ; with a preface by Ken Burns ; picture research by Susanna Steisel ; design by Maggie Hinders. First edition. New York : Alfred A. Knopf, 2014.
General Note
Special features: 13 bonus videos; Making of Roosevelts; Deleted scenes with an introduction by Ken Burns.
Creation/Production Credits
Editor, Paul Barnes, Tricia Reidy, Erik Ewers, Daniel J. White ; cinematography, Buddy Squires, Allen Moore ; music, David Cieri.
Participants/Performers
Narrated by Peter Coyote with voice overs by Paul Giamatti, Edward Herrmann and Meryl Streep ; interviews with Doris Kearns Goodwin, David McCullough, Geoffrey C. Ward, George Will.
Description
Profiles Theodore, Franklin, and Eleanor Roosevelt, three members of the most prominent and influential family in American politics. It is the first time in a major documentary television series that their individual stories have been interwoven into a single narrative. This seven-part, 14 hour film follows the Roosevelts for more than a century, from Theodore's birth in 1858 to Eleanor's death in 1962. Over the course of these years, Theodore would become the 26th President of the United States and his beloved niece, Eleanor, would marry his fifth cousin, Franklin, who became the 32nd President of the United States. Together, these three individuals not only redefined the relationship Americans had with their government and with each other, but also redefined the role of the United States within the wider world. The series encompasses the history the Roosevelts helped to shape: the creation of the National Parks, the digging of the Panama Canal, the passage of innovative New Deal programs, the defeat of Hitler, and the postwar struggles for civil rights at home and human rights abroad. It is also an intimate human story about love, betrayal, family loyalty, personal courage, and the conquest of fear.
Target Audience
[Not rated]
System Details
DVD, NTSC region 1, widescreen presentation; 5.1 surround, 2.0 stereo.
Language
In English (5.1 surround or 2.0 stereo) or Spanish (2.0 stereo); English and Spanish subtitles for the deaf and hard-of-hearing (SDH); English descriptive audio track for people with visual disabilities (DVI).