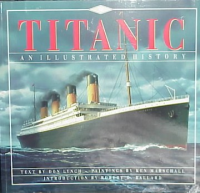 General Note
"A Hyperion / Madison Press book."
Bibliography
Includes bibliographical references (p. 225) and index.
Description
Introduction -- Building the legend -- The voyage begins -- Ship of dreams -- That fateful Sunday -- A deadly encounter -- To the lifeboats -- Death of a titan -- Rescue -- Aftermath -- Questions -- Discovery -- The Titanic legacy.
Description
A huge ocean liner, its lights blazing, its band playing, is slowly sinking in a calm sea. To most people this image evokes one name alone - the Titanic. Eighty years after this great maritime disaster the haunting saga of the Titanic continues to fascinate the world. Now, in one splendidly illustrated volume, the complete story of the giant luxury liner that sank on its maiden voyage in April of 1912 is recreated as never before. Through dozens of full-color, stunningly accurate paintings and illustrations by Titanic artist Ken Marschall, readers can actually experience what it was like to sail on history's most famous ship. From the sight of water crashing through the glass-domed roof of the first-class staircase to a view of an underwater robot exploring the remains of the staircase seven decades later, each of the original Marschall paintings displayed here has a breathtaking impact.
Description
Historian Don Lynch, the foremost expert on the people aboard the Titanic, has compiled a text filled with enthralling new information about the crew, the passengers and the ship itself. Encyclopedic in scope, this volume is an invaluable sourcebook of Titanic lore. Fascinating special features discuss issues ranging from the fate of the dogs on the Titanic to the controversy surrounding whether Captain Lord of the Californian, whose ship was in the area on the night of the disaster, has been unjustly vilified for not coming to the rescue. The pages of Titanic: An Illustrated History also display hundreds of archival photographs, paintings and illustrations, many of them published here for the first time. Authors Lynch and Marschall have also located and photographed fittings and fixtures from the Titanic's nearly identical sister ship, the Olympic, and can thus reveal the Edwardian splendor of the ship's interiors in colorful visual spreads.
Description
The book's showpiece is without doubt its three-page foldout which reveals an original cutaway diagram of the Titanic. In this remarkable full-color illustration created by Ken Marschall expressly for this book, the Titanic's hull is opened up to reveal the layout of her public rooms and staterooms in accurate detail. With all the splendor and pathos of the night that will never be forgotten, here is the complete Titanic - from first conception to final repose on the ocean floor - compellingly recalled in one handsome volume.
Local note
Publisher varies.
Table of Contents
Loading Table Of Contents...
Subjects
LC Subjects
Shipwrecks -- North Atlantic Ocean -- History -- 20th century.
Shipwrecks -- North Atlantic Ocean.
Titanic (Steamship)
Underwater exploration -- North Atlantic Ocean.
Also in this Series

Note! Citation formats are based on standards as of July 2010. Citations contain only title, author, edition, publisher, and year published. Citations should be used as a guideline and should be double checked for accuracy.
Staff View
Loading Staff View.
Powered By Aspen Discovery supported by ByWater Solutions
v. 21.02.00
CONNECT WITH US