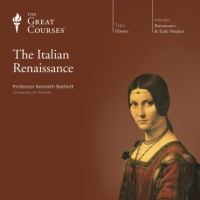 General Note
Course guidebook includes lecture outlines and notes, a time line, glossary, biographical notes, and bibliography.
Creation/Production Credits
Producer, Alisha Reay ; academic content supervisor, Ann Waigand ; director, Jon Leven ; camera operators, Alexis Doty, Jared Bourgeois, Tom Dooley, Jim Allen ; editor, Alisha Reay.
Participants/Performers
Thirty-six lectures of thirty minutes each by Kenneth R. Bartlett, Professor of History and Renaissance Studies, University of Toronto.
Description
When considering the Italian Renaissance, the extraordinary sculptures of Michelangelo, the incomparable paintings of Leonardo da Vinci, or the immortal written works of Petrarch and Machiavelli spring to mind. Why there was such an artistic, cultural, and intellectual explosion at the start of the 14th century in Italy and not another part of Europe? Why did it ultimately fail in the middle of the 16th century? These lectures explore the underlying social, political, economic, and religious forces that made Renaissance Italy capable of its contributions to art, culture, and science that made much of modern life possible.
System Details
DVD.