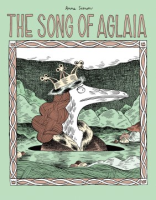 General Note
Originally published in France as La Geste D'Aglaé.
Description
"Aglaia is a simple sea nymph. One day, a Merman seduces Aglaia, forever altering her life's course. She is cast out of Oceanid by her chauvinistic father, forcing her to wander many days and nights, until one day she finds herself at the benefit of one Mr. Kite, whose traveling circus welcomes her (including the star attraction, a waltzing Horse named Henry) and once again alters her fate, sending her down many more unexpected paths. The Song of Aglaia is the first solo graphic novel by cartoonist Anne Simon, presenting a beautifully crafted female spin on the classic heroic myths of Greek literature, tracing the journey of a victimized and then almighty woman with a graceful understanding of human relationships and loving nods to the Bronte sisters, David Bowie, and the Beatles"--,Amazon.com
Description
Betrayed by her fleeting first love and her father's cold rejection, Aglaia the Oceanide conceives at a very young age a fierce hatred of men. She is by turns a reluctant wife, a passionate lover, an absent mother, a heroic fighter, and a revolutionary queen--and through it all, her destiny is inexorably linked to the complexity of her character in this deeply human, contemporary, and iconoclastic comedy. Cartoonist Anne Simon showcases a deft touch in this astute dissection of human relationships, which weaves 19th century France, biting feminism, and the pop imagination of the Beatles into one deliciously philosophical farce, full of subversive twists and comical turns.
Language
In English. Translated from French.

The Oceanides
The circus
Anne, Charlotte & Emily
The abduction
Aglaia's victory
Her reign
The field of chasms
Kite & Aglaia
The crown
The child.